Mississippi’s top election official says he is worried that the nation will suffer if more “woke” and “uninformed” college students become registered voters. Mississippi Secretary of State Michael Watson made that remark in a televised interview while describing President Joe Biden’s March 6 executive order on “promoting access to voting.”

“You’ve got an uninformed citizen who may not be prepared and ready to vote. Automatically, it’s forced on them: ‘Hey, go make a choice.’ And our country’s going to pay for those choices.”

“Woke” is a term that originated in Black culture to describe enlightenment on issues of systemic racism and white supremacy. As a national race awakening swept the nation over the past year, though, many white Republican and conservative politicians, including U.S. Sen. Roger Wicker and Republican Senate Minority Leader Mitch McConnell, have increasingly begun using “woke” as an epithet to mock or criticize proponents of anti-racist ideas.

During her 2018 campaign, U.S. Sen. Cindy Hyde-Smith drew national headlines after Bayou Brief published a video of her at a campaign stop in Starkville referencing “schools” with “a lot of liberal folks … who maybe we don’t want to vote.”

“Maybe we can make it just a little more difficult. And I think that’s a great idea,” she said in the video. Hyde-Smith later claimed she was joking but did not clarify which “schools” she was referencing.

“His talking points are from (the) 1950s. Slightly updated. Literacy tests anyone?” wrote Mabus, who served as U.S. secretary of the Navy under former President Barack Obama.

During the Jim Crow era, segregationist politicians in Mississippi and other Deep South states used literacy tests and poll taxes to effectively bar Black people from voting. One 1955 voter application test directed election officials to name a numbered section of the Mississippi Constitution and not only ask voters to copy the text of the section, but to then describe “a reasonable interpretation” of its meaning.

Black Mississippians were already at a disadvantage due to significantly higher illiteracy rates stemming from disparities in educational opportunities. Registrars often further compounded those inequalities with literacy tests by assigning short, simple-to-understand sections to white applicants but long, complex sections to Black voters. The test also asked voters to write “a statement setting forth your understanding of the duties and obligations of citizenship under a constitutional form of government.”

Earlier this year, Mississippi legislators introduced several bills that would have limited voting in some places, including a Watson-backed bill that would have required some voters to provide proof of citizenship. All of the bills died before the legislative session ended.

Arekia Bennett and the organization she directs, Mississippi Votes, tracked those bills throughout the session, and told the Mississippi Free Press last month that such efforts could “resurface at any time.”

“It goes to show you that what happened in November when a record number of Mississippians, including Black or indigenous people who have been marginalized for centuries in this country, turned out to vote. … When this kind of thing happens, there’s almost always an attempt to turn us back to the Jim Crow era and package it as something else,” she said.

In 2017, then-Sen. Sally Doty, a Republican, introduced Senate Bill 2702, which would have made absentee voting easier for college students by allowing college registrars to witness their absentee ballot application. The Senate passed the bill 30-20 with cross-partisan support, but then-Sen. Michael Watson voted against it. The legislation died in the Mississippi House.

In the WLOX interview, Watson made additional claims about Biden’s March 6 executive order, positing an additional scenario where he implied the president could be sneakily registering people to vote without their knowledge.

“So you think about the (Gulf) Coast, we have a hurricane, FEMA comes in, we get FEMA help. On that FEMA application now is going to be an area for voter registration, and it’s automatic voter registration unless you opt out,” Watson claimed.

The White House declined to respond to Watson’s remarks, but a copy of the executive order and a March 6 White House statement announcing the order provides no evidence for these claims. The order does not offer any specific directive for colleges, universities or FEMA. It also does not mention using unrelated forms for automatic voter registration or requiring people to “opt out” of becoming registered to vote. 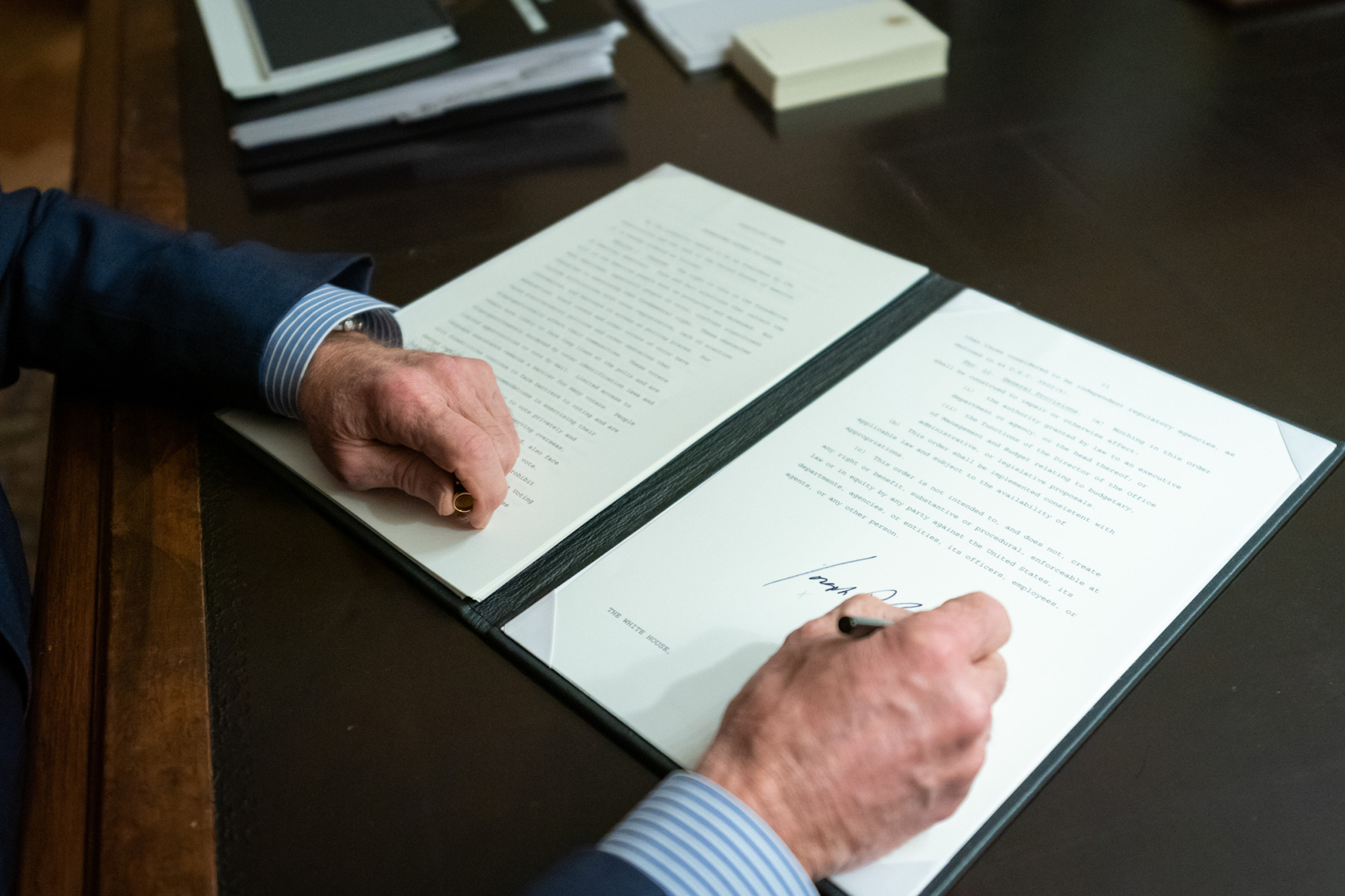 President Joe Biden signs his executive order on promoting access to voting on the 56th anniversary of Bloody Sunday on March 6, 2021, in the Treaty Room of the White House. Official White House Photo by Adam Schultz

Instead, it orders federal agencies to “evaluate ways in which the agency can, as appropriate and consistent with applicable law, promote voter registration and voter participation.” The agency heads should consider “ways to provide relevant information in the course of activities or services that directly engage with the public,” it says, including through “agency materials, websites, online forms, social media platforms, and other points of public access” on “how to register to vote, how to request a vote-by-mail ballot, and how to cast a ballot in upcoming elections.”

The order also directs the agency heads to find “ways to facilitate seamless transition from agencies’ websites directly to State online voter registration systems.” The heads must submit “a strategic plan outlining the ways identified under this review that the agency can promote voter registration and voter participation” within 200 days, Biden’s order says.

The president signed the order on the 56th anniversary of Bloody Sunday, commemorating the day when Alabama state officials met voting rights activists with violent force in Selma.

Watson could be conflating Biden’s executive order with proposed legislation currently making its way through Congress known as H.R. 1 and S. 1, or “The For The People Act.” The bill, which the House passed last month, is a package of federal voting reforms by lawmakers aiming to make voting more accessible and prevent states from enacting certain ballot restrictions.

H.R. 1 requires all states to enact automatic voter registration for federal elections. Under it, the government would automatically register eligible citizens to vote in federal elections when they provide information to government agencies unless they opt out. Automatic voter registration already exists in 19 states plus the District of Columbia.

‘An Enlightened and Responsible Vote’

Even outside the South, Watson’s suggestion that voters deemed uneducated or ill-informed could undermine the country’s future is not new. In 1957, William F. Buckley, the founder of the conservative National Review magazine, wrote an editorial in defense of the South’s Jim Crow laws titled, “Why the South Must Prevail.” 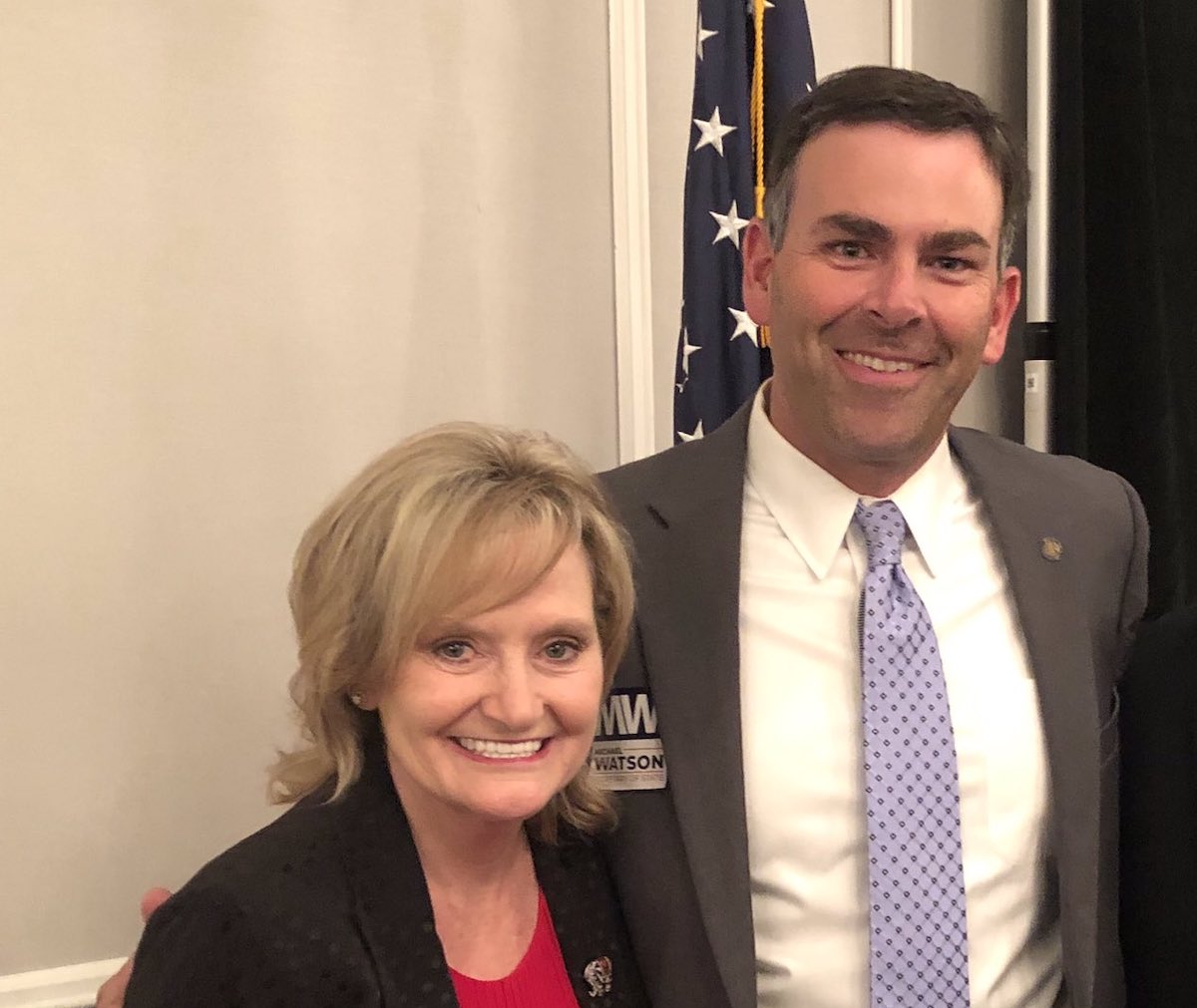 “The central question that emerges … is whether the White community in the South is entitled to take such measures as are necessary to prevail, politically and culturally, in areas in which it does not predominate numerically? The sobering answer is Yes—the white community is so entitled, because, for the time being, it is the advanced race.”

Later in the editorial, Buckley dismissed the notion of “universal suffrage.”

The South, he argued, had the right to restrict the vote so long as it worked to eventually “equip the Negro—and a great many Whites—to cast an enlightened and responsible vote.”

“People who call anything in today’s America ‘the new Jim Crow’ are advertising their own lack of seriousness and ignorance of history, as well as—in many cases—their naked cynicism,” Lowry wrote today.

Watson Opposes ‘For The People Act’

Georgia Republicans adopted the new law last month after the state’s voters picked Biden and replaced their two Republican U.S. senators with Democrats who happen to be the first Black and Jewish members. Georgia voters had not selected a Democrat for any of those offices in decades, and their U.S. Senate choices gave Democrats control of both branches of Congress and the White House for the first time in a decade.

As he and other Republicans made evidence-free claims of widespread voter fraud, President Trump tried to pressure Georgia’s secretary of state into changing the results of the presidential ballot to give him the state’s electoral votes, but Republican Secretary of State Brad Raffensperger refused. The law that Republicans passed in March strips the secretary of state of his power on the State Board of Elections and lets state officials usurp power over elections from counties. 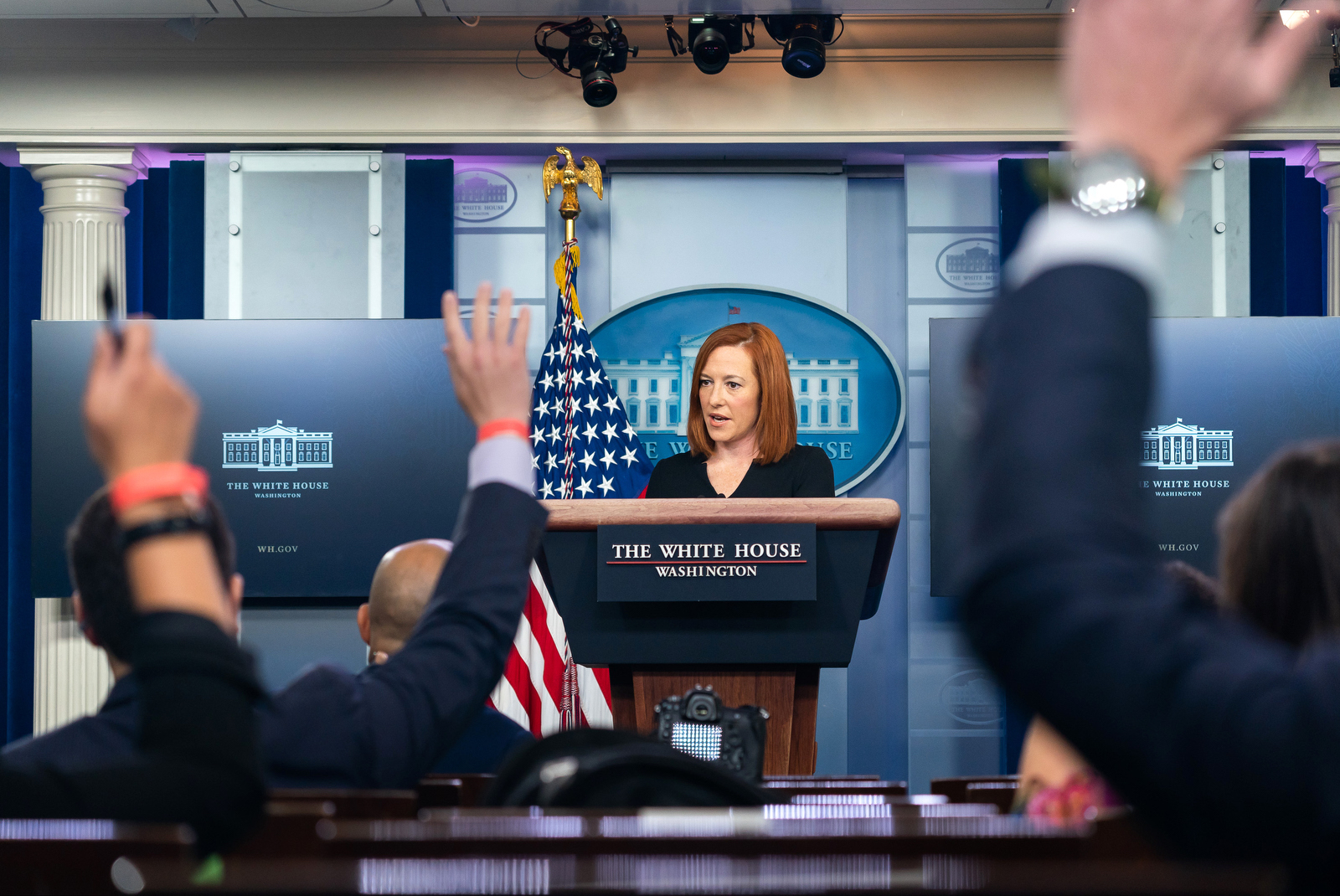 “The Georgia legislation is built on a lie. There was no widespread fraud … Instead, what we’re seeing here is for politicians who didn’t like the outcome, they’re not changing their policies to win more votes, they’re changing the rules to exclude more voters,” White House Press Secretary Jen Psaki (seen here in February 2021), said during an April 6, 2021, White House press conference. Official White House Photo by Chandler West

The law also makes it a misdemeanor for citizens to offer food or water to voters waiting in line in Georgia. During the 2020 election, some voters waited as long as eight hours in line. Voters in 90% Black precincts waited, on average, eight times as long as voters in 90% white precincts.

“The Georgia legislation is built on a lie. There was no widespread fraud … Instead, what we’re seeing here is for politicians who didn’t like the outcome, they’re not changing their policies to win more votes, they’re changing the rules to exclude more voters,” White House Press Secretary Jen Psaki said during a White House press conference today.

In his March 26 interview with WLOX, Watson said he opposes the “For The People Act.”

“It’s basically the roadmap of 2020 put into elections. You talk about voter ID, should this pass, you would not be able to force someone to show voter ID,” Watson told WLOX. “Basically someone could come in and say, ‘I am who I am and, oh, by the way, I’ll sign an affidavit,’ but they would not have to show voter ID.”

The For The People Act requires states with voter ID laws to allow would-be voters who do not have photo ID when they arrive at the polls to satisfy the requirement “by presenting the appropriate State or local election official with a sworn written statement, signed by the individual under penalty of perjury, attesting to the individual’s identity and attesting that the individual is eligible to vote in the election.”

The For The People Act also bars states from requiring voters who cast ballots by mail to include photo ID. Georgia implemented ID requirements for mail-in votes in its new law last week.

Those changes would have little impact on Mississippi’s voter ID law, though. Mississippi voters can already vote by sworn affidavit if they do not have a photo ID on Election Day, and their ballot will count so long as they present an accepted form of ID to their circuit clerk’s office within five business days.

Both of Mississippi’s U.S. senators, including Wicker and Sen. Cindy Hyde-Smith, are also against the bill, which must pass the U.S. Senate before President Biden could sign it into law.